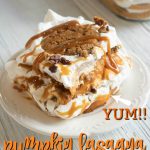 If you're looking for a delicious pumpkin dessert with layers, you're going to love this delicious Pumpkin Lasagna Dessert Recipe!