These Banana Pudding Cheesecake Bars are the perfect treat for any occasion. A Nilla Wafer crust is topped with rich, creamy banana pudding cheesecake, and it’s all finished off with Cool Whip and a banana slice.

You’ve probably noticed that we’ve been posting a lot of cheesecake recipes lately. That’s because the warm weather is coming (allegedly), and we love anything cheesecake on a hot day. It’s so smooth and refreshing. It’s just the perfect treat to cool off.

Today, we’re sharing a super simple cheesecake recipe. Unlike the previous few we’ve shared with you, this is another great no-bake variety that comes together in just minutes and is ready to go after a couple of hours of chilling.

These cheesecake bars are rich, decadent, delicious, and most importantly, EASY. It all starts with the classic flavor of Nilla Wafers in the form of a delicious crust. Then, we top it with a banana pudding cheesecake layer that marries both flavors together perfectly. Finally, we gild the lily with Cool Whip and banana slices for a garnish. What you end up with is a cheesecake recipe that is full of all the flavors we love in classic banana pudding. It doesn’t get better!

It only takes a few simple ingredients to make this recipe. You’ll have most of them in your kitchen already, and the ones you don’t have can be easily found at your local grocery store.

Making this recipe is a very simple process. No baking is involved, and it only takes a few simple steps.

Add Nilla Wafers to a food processor and pulse until they’re reduced to crumbs. Then, add the brown sugar and melted butter and mix well. Press the crust into a baking dish lined with parchment paper, spreading the layer evenly over the bottom of the dish. Place in the freezer.

Beat cream cheese in a large mixing bowl for about a minute. Then, add the sugar and pudding mix and mix again. Next, add the Cool Whip and mix to combine. Finally, slowly add the milk, mixing between each addition. Pour the cheesecake mixture over the Nilla Wafer layer and chill in the freezer for about 4 hours.

Thaw the cheese cake for 1 to 2 hours in the refrigerator before serving. Then Cut it into bars and top each one with whipped cream, Nilla Wafers or Nilla Wafer crumbs, and banana slices. Enjoy!

Hint: It’s vital that you line your baking dish with parchment paper, or you’ll be serving up spoonfuls of this dessert rather than slices.

You’ll only need a few basic pieces of kitchen equipment to make this recipe.

This recipe is one of the easiest that you’ll ever make, but we still have a few tips here that will help you make it the best that it can possibly be.

Fully Softened Cream Cheese – This recipe has a smooth, creamy cheesecake layer, and you can only get that silky smoothness if your cream cheese is fully softened.

Parchment Paper – You absolutely must line your baking dish with parchment paper, or you’ll never get the bars out of the baking dish.

Adding the Milk – It’s better to add the milk a little at a time. Otherwise, you’ll be trying to mix in a ton of liquid. This, of course, will lead to splashing and a big mess in your kitchen.

These cheesecake bars will keep well in the freezer in an air-tight, freezer-safe container for up to a month.

If you’re a fan of no-bake cheesecake, then we have some recipes that we think you’re going to love.

How long will these bars last?
You can store them in the freezer in an air-tight, freezer-safe container for up to a month.

Where was cheesecake invented?
Cheesecake was actually invented in Greece, not in New York. 5th century Greeks on the island of Samos created the earliest known cheesecake.

Give These Banana Pudding Cheesecake Bars a Try

There’s nothing better than these banana pudding cheesecake bars. They’re so easy to make, and they’re loaded with delicious cheesecake and classic banana pudding flavors – right down to the Nilla Wafers! Give this recipe a try, and we know you’ll love it as much as we do. 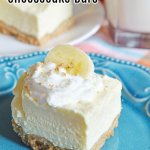 Notes: Any nutritional data I provide is an approximation and actual dietary information can vary based on ingredients and proportion sizes 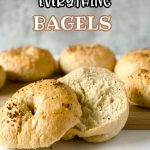 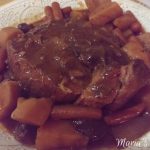 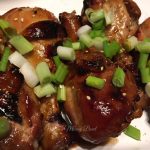 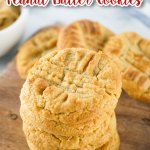 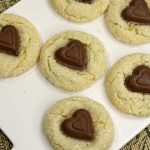 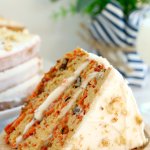