Strawberry Cheesecake Poke Cake is a super simple recipe that your family will love. Using cheesecake pudding and strawberry Jello, this recipe easily and quickly creates the flavors of strawberry cheesecake in a delicious and pretty dessert that’s easy to make and is always a big hit with everyone.

Strawberry cheesecake is a classic dessert flavor that almost everyone loves. The same can be said of pretty much any poke cake ever made. We’ve made both more times than we can count. One day, when we were at the store, we saw a package of cheesecake pudding, and that got our wheels turning. What if we combined both of those great desserts into one super dessert? And thus, strawberry cheesecake poke cake was born.

Everybody knows we love simple easy desserts. You can’t get any easier than this delicious dessert. I mean cake mix desserts are great to begin with then adding to them makes them even better!

And we don’t mean the magazine. We mean time itself. This dessert is the product of three specific things. Without even one of them, this delicious poke cake would not exist. Those are cheesecake, poke cake, and cake itself. After all poke cake is a variation of a traditional cake.

These three individual foods are the basis for our delicious recipe, so we want to take a minute to talk about each of them.

Traditionally, a cake is a sweet baked food made from flour, sugar, and various other ingredients. In their oldest and simplest form, cakes were actually modified bread. These days cakes are made in more ways than you can count, being as simple or as complex as the baker wishes. We even call certain dessert cakes that aren’t actually cakes, strictly speaking.

Over the years, the traditional cake has been tweaked, changed, and revamped millions of times to create all sorts of cake variations from trifles using sponge cake to, you guessed it, poke cake. Speaking of poke cake…

This variation on the cake is relatively new and was made specifically to sell a product. However, this recipe is still around because it makes cakes oh, so moist. So let’s see where it came from.

A poke cake is the product of 70s marketing. Originally created to boost sales for Jello, which was lagging at the time, poke cake was pure marketings.

Full-page ads for the new poke cake began appearing in all the usual periodicals that women read in the 70s like Redbook and Ladies Home Journal, touting the new cake innovation.

Poke cake quickly became the new favorite of housewives everywhere because of how easy it was to make, and soon these cakes became a staple of potlucks, holiday gatherings, and backyard bashes.

Fast forward to today, and although poke cake was devised in a board room rather than a kitchen, it’s stood the test of time. You’ll find an absolutely mind-boggling array of poke cakes online including this delicious strawberry cheesecake poke cake. Oh, and while we’re talking about cheesecake.

Cheesecake has a long, long history. In its earliest forms, cheesecake is mentioned by Aegimu, a 5th century BC physician. A later, more closely related version called sambocade can be found in Forme of Cury, an English cookbook from 1390.

Over hundreds of years, Europeans began removing the yeast that was a common ingredient in the earliest modern cheesecake recipe and began adding beaten eggs instead. Around the 18th century, with the overpowering yeast flavor done away with, cheesecake became more of what it is today.

The best thing about poke cake is how easy it is to make, so when we discovered instant cheesecake pudding, we knew that we had to put them together. The flavors of strawberry cheesecake made from two boxes of easy-to-make dessert products were the perfect addition to a poke cake base. We knew it would be delicious, and we were right!

This strawberry cheesecake poke cake is such a simple recipe, and it’s filled with such delicious flavors, it’s always a winner for both you and your guests. Serve it up as a weeknight dessert, at potlucks and summer get-togethers, or even as a holiday dessert. There’s never a wrong time to make this cake!

It only takes a handful of ingredients to make this delicious poke cake. With just six ingredients, you’ll have everything you need to make one of the tastiest and easiest recipes you’ve ever made! Here’s what you’ll need.

That’s all there is to it. You can probably already see that this is an exceedingly simple recipe just from looking at the ingredients. But just wait until you see how it’s made.

Making this delicious strawberry cheesecake poke cake is just as simple as the ingredient list. It only takes a few minutes and almost zero effort to bring it all together.

You’ll find the complete recipe complete with amounts in the recipe card at the end of the post, but for now, we want to give you a quick overview of how it all comes together.

Talk about easy! The only actual cooking you’ll do is making a boxed cake and boiling water for the Jello. It doesn’t get easier than that!

The great thing about poke cakes is that you can change them up so easily, and that’s no different with this strawberry cheesecake poke cake. With only two tweaks you can create entirely different recipes by simply using this recipe as a base.

This recipe calls for white cake, but you can use any cake you like. For even more strawberry flavor, you could use strawberry cake. A vanilla cake would work well for this recipe. So would a yellow cake. Or a butter cake too!

Go further, and you can begin creating an entirely different poke cake recipe with these instructions by changing the cake to anything you desire. There are tons of cake mixes in the baking aisle, so it’s easy to get creative.

The baking aisle has flavors ranging from traditional flavors like strawberry to more tropical things like lemon or lime or even pineapple. Get creative and have fun!

Finally, we come to the pudding. Changing it up is another excellent way to get creative and use this base to make an entirely new recipe. Literally, any pudding will work because you can pair it with all kinds of other flavors available for Jello and cake. The possibilities are endless!

We love cheesecake pudding so tend try to find cake mixes and jello that will go well with that. Flavor wise it’s really up to you.

This cake is pure deliciousness all on its own, and because it’s already topped with Cool Whip, there’s no reason to add a thing. All you need to serve this cake is a plate and a knife! Just add a glass of milk, and you’re all set.

Give This Strawberry Cheesecake Poke Cake a Try

Make this strawberry cheesecake poke cake just one time, and we guarantee it will be a staple in your dessert recipe rotation. It’s so simple to make and filled with such delicious flavors, you’ll find yourself making it more and more. So whip up a batch. Your family will love it! 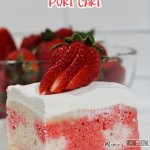 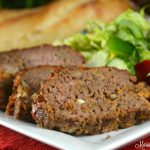 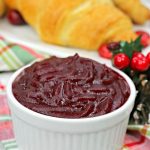 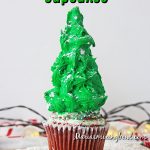 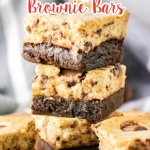 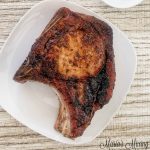 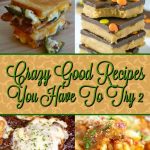